“On the rooftops, you have such a feeling of complete freedom”, Kirill tells us, suspended by one arm, his body dangling into thin air.

The young 19-year-old from Moscow abandoned his studies and is fleeing the shadow of military service. He climbs to the top of the city skyscrapers, makes videos, and posts photos on social media.

His friends do not understand him. They think he is wasting his time and wonder if he is not “empty inside”. Kirill seems calm in himself, detached, indifferent, even. What answers are written for him, up there in the stars? 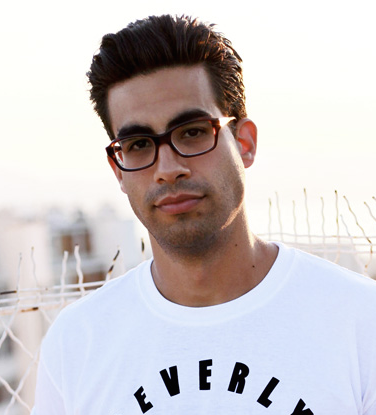 “I’m afraid of heights,
so I was immediately drawn in
by the look of eerie calm in Kirill’s eyes
while doing these dangerous things.”

I’m a filmmaker based in the US. Since as far back as I can remember, I have always been obsessed with films! I was brought up just outside of London, England and moved to the US to study for a liberal arts degree with a focus on film. After studying, I travelled a fair bit, backpacking and working on farms, which became my other big interests.

Documentaries are a great vehicle to explore all your curiosities and this is how I first came across “rooftopping” and then eventually to Kirill. 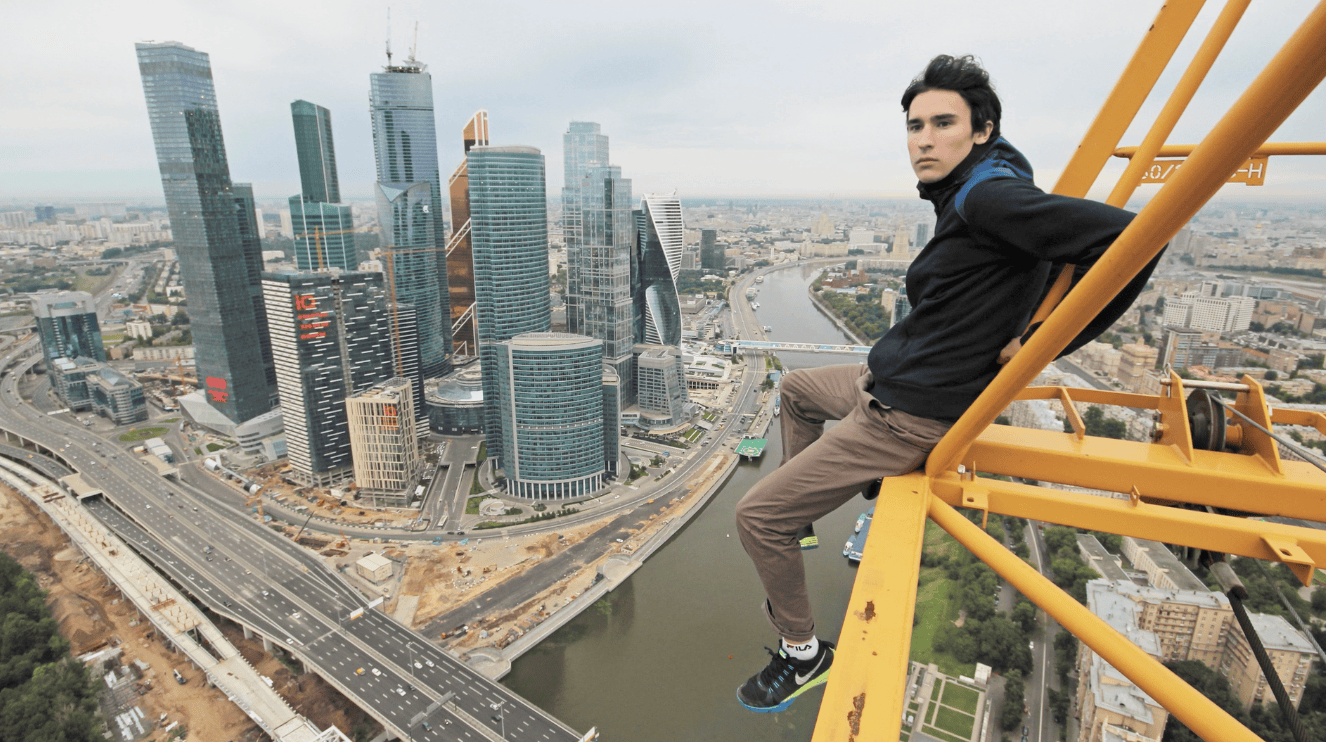 Kirill had posted several pictures of himself online, on different roofs in Moscow. They had started to circulate and as soon as I saw them they made me break out in a cold sweat. I am afraid of heights, so I was immediately drawn in by the look of eerie calm in his eyes while doing these dangerous things.

It was a bizarre contrast, like what he was doing was no big deal. I wanted to meet him and see what was going on behind those eyes. The photos went viral, so I followed them to the source and eventually connected with him. I was also really interested in this Russian roofing subculture.

“There is something enigmatic about Kirill.
He is struggling internally,
testing and taking measure of himself. ”

There wasn’t really any convincing or fears in Kirill or his group of roofing friends of getting into serious trouble. Doing what they do is seen as a pretty minor infraction, depending on the situation, so I took my cues from them as to if I should be filming or not.

It’s a part of the roofing subculture to look for a building you want to go on top of and then find a way to get up there by whatever means you can. Sometimes it’s as simple as going up a few flights of stairs and opening an unlocked door, other times, it requires other means.

Roofing is an offshoot of urban exploration, which Kirill and the group were into, so there is a similar mindset to go and explore places with or, most often, without permission. If Kirill or the others had any issues with me filming certain things they didn’t want to be shown, I would have not shown them. 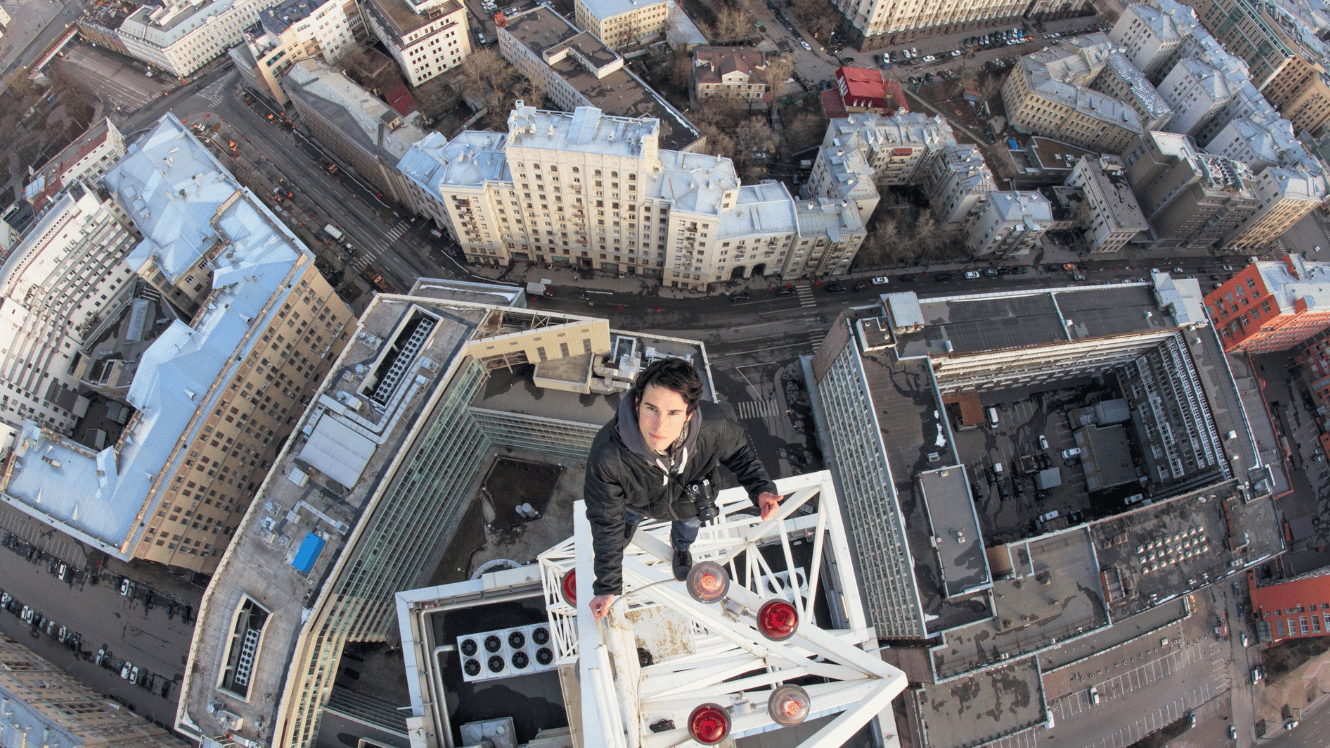 No, I felt safe with Kirill and his group of friends. They had been “rooftopping” for a long time by the time I came to film, so I had the feeling of being with a seasoned group. Aside from a couple of hairy situations, it wasn’t really much of an issue that we could get caught – people didn’t really seem to care!

The main concern I had was that Kirill would not feel pressured to perform any “stunts” like hanging from the roofs for me, I made that clear to him from the outset. As you say, the footage in the film of him doing dangerous stuff was filmed before I had met him. My main interest was to get to know him, not to see him perform these stunts for me.

I kept everything down to one backpack, to be discreet. I shot with a DSLR camera, and had a separate sound recorder attached to the hot shoe on top, and sometimes along with a shotgun mic. I shot almost all of it handheld, so it was a small set-up.

“The film resonates with current events.
There are big parallels
with what’s happening now.”

Kirill loves his city, he seemingly knows every nook and cranny of Moscow and all its hidden beauty. It’s a very unique way to get to know the place you live, sneaking into building sites, climbing on cranes and seeing what new buildings are going up and also going on top of the extremely old buildings.

I was very inspired by how much of an ownership you can have over a place by really exploring it in the way that he and his friends do. You understand that it’s a powerful feeling going to these places that not many others go to. Being up there with a spectacular, unique view is a feeling of complete freedom and it is quite intoxicating. He knew the history of all the places we went and would tell me all about it.

You are right. At the time of filming Kirill was not an activist or very politically motivated. After filming, it turned out that he got out of conscription with a medical exemption.

There is something enigmatic about Kirill, he is struggling internally, testing and taking measure of himself. I think that he was at a real crossroads in his life during the filming. Having dropped out of a good university and the defined life track that was coming with it, he was confused as to what direction to go in. He often seemed lost in thought and trying to find his bearings. In this process of self-discovery, it felt like the one big thing he does really value is the freedom to explore and see what is out there for him. This is why he can seem somewhat puzzling. He is a 19-year-old trying to find space to figure out what he wants, but the army and conscription are a genuine danger for him, and they could snatch this freedom away from him at any point. I don’t think he is indifferent, there is a lot of struggle going on there under the surface.

As for politics, this is a tricky subject, because in my mind even if it is not being said out loud by someone, the personal is the political, how he chooses to live his life – the fact that he is up on the roofs, the mentality of exploring all the time, shows how open to things and free he is. To me, that is political, considering the options that faced him – army or university.  He is choosing to find his own way outside of these. 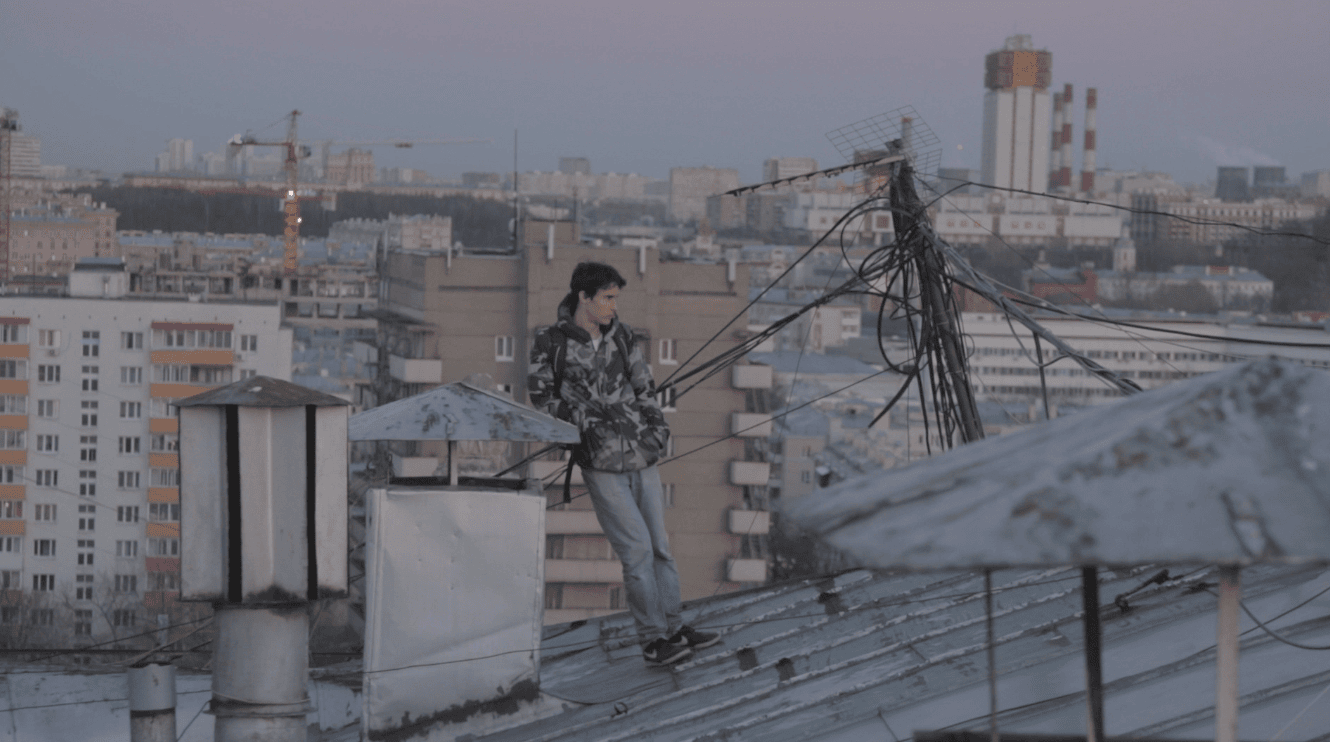 The film resonates with current events, there are big parallels with what’s happening now. The film was shot in 2014, right after Russia annexed Crimea, which was very alarming at the time. So this was in the air while we were filming. One member of the group had even been roofing in Kyiv during the Revolution of Dignity.

The fact that Kirill got a medical exemption from the army was a big relief. I have been following the war closely, and feel terrible for those young men that have been snatched up, conscripted, and suddenly thrown into a war.  It’s a tragedy for Ukraine and also young, outward-looking Russians.

A number of Kirill’s friends in the rooftopping community that I filmed with have recently fled the country to Turkey and other places, afraid that they would be conscripted too. I have been in touch with a couple of them, and it was a huge decision for them to suddenly leave, abandoning their lives until this debacle is over. It has been like a bomb that has gone off in their lives. It is a horrible situation.

He is OK. We are in contact quite a bit these days, I check in with him about all the events happening now. He is finding work taking photos and making furniture. He is anti-war and when it initially broke out he went out on the streets and protested and got detained for 8 hours. 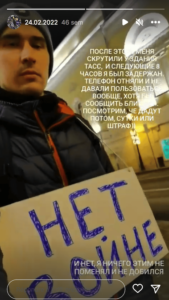 My focus is on a project I am editing, it is a feature length documentary that I have been working on for a little while now. This should hopefully get finished soon!

I really enjoyed ‘Connected‘. It’s a very pretty portrait of a couple as they navigate a day on the Polish ski slopes as a seeing-blind couple. I love how it all takes place over just one day and through their activity you really get a sense of the depth of their relationship. It also got my heart rate up when they eventually start skiing, wow! It makes you feel viscerally what it would be like to do that whilst not being able to see, how scary and how amazing that would be.

Also, ‘Tungrus’ was a lot of fun, I laughed out loud a lot! The father, wanting to replicate his childhood memories, was a really strange, funny person. Great character. But the reality at the end was so sad, and obviously makes you think about your relationship with what you eat, a massive issue in our world and a really interesting angle on this. Also, the interview with the director of this film is great, highly recommended!

It is so cool that the film is being translated into several languages! This prospect that it will open the film up to a wider audience is very, very exciting. What an incredible opportunity 99 is offering to the films on the site!

The film has only existed in Russian with English subtitles for so long now. As a matter of fact, I recently sent the film to some new friends who only speak Italian, so the fact that it means they can now watch the film and understand it is a big gift! Thank you very much!