When Mr Bharde brought home a new-born chick to his small apartment in Mumbai, it won the hearts of the whole family. But the chick grew up, became a rooster, and rained down terror in the confines of their home.

What fate should await this cocky housemate?

The Indian filmmaker Rishi Chandna settled on the title of Tungrus for his first short documentary, and in so doing, made us all crack up. The laughter took flight from one festival to the next – now it’s winging its way to you! 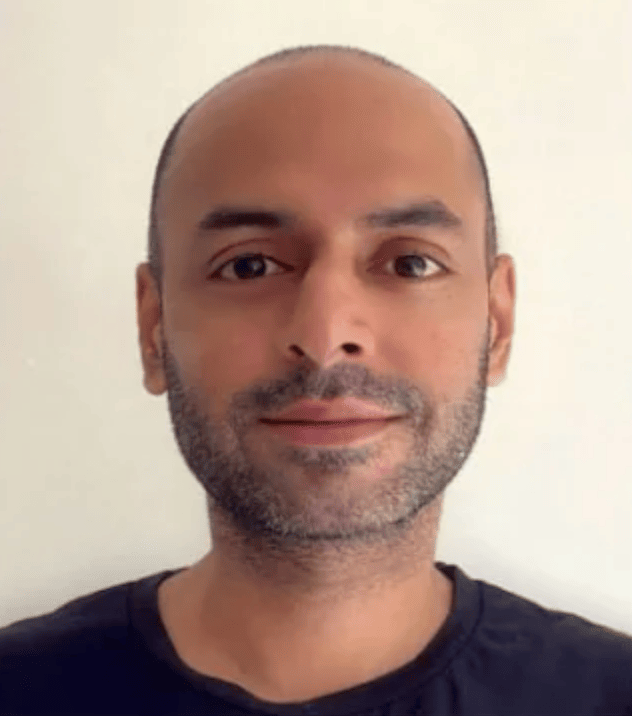 “Back then I was living in a really small
one-room apartment in Bombay with a cat
and I immediately started to imagine
what it would be like… if I also had a rooster!”

I was born and raised in Calcutta and I now live in Goa.

I’m a self-taught filmmaker. Whatever I studied was, like, the most boring education actually! Business, accounts, marketing… It didn’t prepare me for the world I now work in, but still, I have to admit that I studied that for years!

Fortunately, some of the places where I studied had side courses in culture and communication, film studies, semiotics, and it really started to interest me. At that time a friend of mine had a hard drive with 500 films floating around on campus. Of course, nowadays you can stream everything, download everything, but it was different back then. I started watching all those films and opened up to other art forms like music and poetry.

After two years in the corporate world, I quit my job and had no idea how to become a filmmaker. In India, most people first become assistant directors, then third AD, then second AD and then they become directors. But AD is not really a creative position, it’s a production job, so I was not keen on that.


I then started making “wedding documentaries” for friends. Not like the traditional wedding videos that you see with interviews, slow motion shots and all that nonsense! They were friends, so I would have access to the whole situation. This was more like cinema vérité. You know, you get access to the bride getting drunk and throwing up, to people making fools of themselves…

After these wedding films, I started doing commercials in Bombay. Living in Bombay itself is like a film school actually, because you have to pay the bills. So as a filmmaker, one of my first jobs was to shoot behind-the-scenes videos on big Bollywood films. I saved money until I found the subject for Tungrus, and the moment that subject came to me, I just had to make the film. 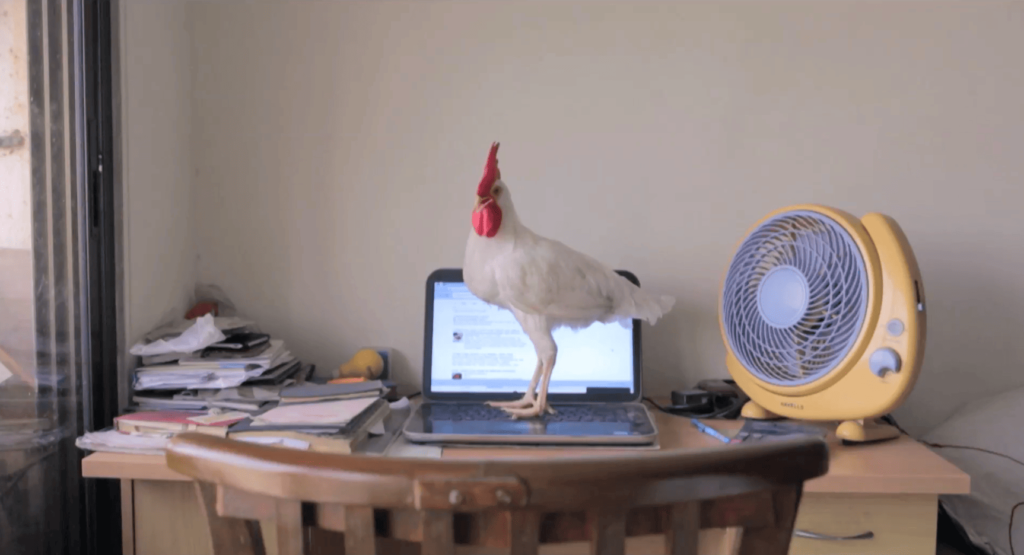 Back in 2017, my wife came home after work. I asked her about her day and she said that a friend of hers, Sameer, told her he was having so many fights at home with his father and that they were not talking to each other. I said: “Why?”. And she said: “Because they’ve had a chicken at home for 6 months and it’s driving them crazy. His father wants to kill it and eat it. But Sameer says no, like, we know this chicken!”

She presented this really casually, like a normal conversation! I was immediately very curious. I had never heard of anything like this. Bombay is a chaotic, very densely populated city of 22 million people, where the idea of personal space is nonexistent. You can have 8 or 10 people from a single family living in one room. Back then I was living in a really small one-room apartment in Bombay with a cat and I immediately started to imagine what it would be like… if I also had a rooster!

I wondered: “What is this family like? What are they going to decide? Should the chicken live or die?”. You had a great conflict, a great situation that had to be resolved. So I approached the family through my wife, I explained why I wanted to shoot a film, and they were up for it! 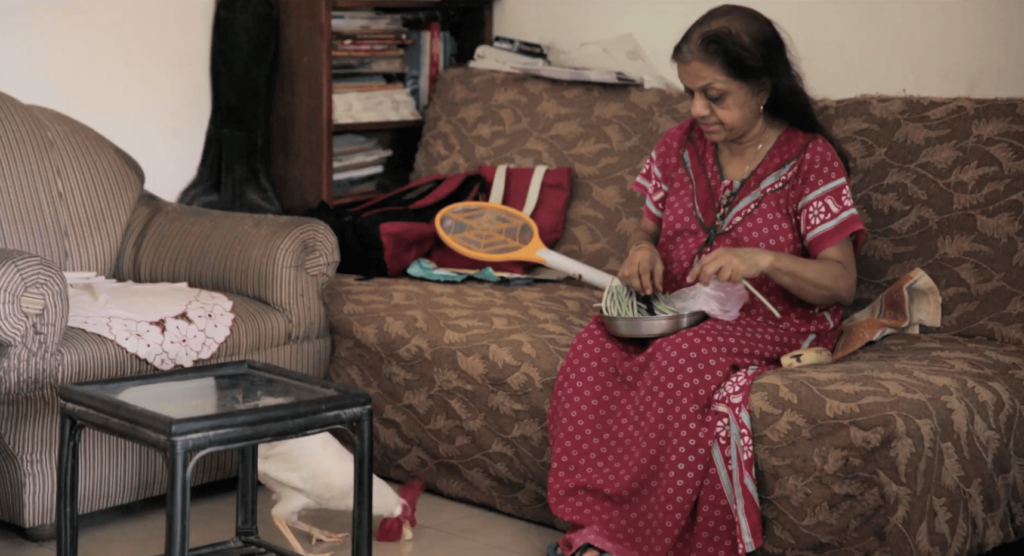 The family told me they were about to leave their apartment for a new one. They would move a month later so they said I could shoot whatever I wanted before they leave. And before they left, they had to decide what to do with the chicken… So I had one month, that was my shooting window.

I visited the family a few times without the camera, just to observe. To see how the chicken behaved, how they behaved, what their daily routine was like. I then built a bit of trust and then we started filming for 8 days with a very small crew – ‘small crew’ meaning myself, a cinematographer with an old Canon camera on loan, no lights, and a sound recordist. It’s a small home anyway! You cannot invade somebody’s home with an army of technicians, like a film crew, equipment and all. And anyway, we didn’t even have any money for that! Also, we were filming with animals and they’re very sensitive. So I worried that the two cats and the rooster would stop doing what they usually did because of us ‘outsiders’. The process was to keep it small, be quiet, work slowly, work quietly, within the confines of that space.

That is why the camera is always locked on the tripod. It would have been so easy to go handheld and to follow the chicken around. But I think it was more challenging to just be still and silent and be more, you know, like, tongue in cheek.

“Bombay is overcrowded, it’s packed.
You have such a density of people
that it leads to chaos
and that leads to extraordinary situations.”

The moment I heard about that family with the chicken, I felt that there was something very absurd about it. There are many different kinds of humour and I’ve always been turned on by black humour, dark, deadpan humour, because that kind of humour is more subtextual, it’s more under the layers of the surface-level story.

I knew from the start that there was something which was not just slapstick funny there. It helped me to understand how to shoot, how to edit it, how to capture that tone. 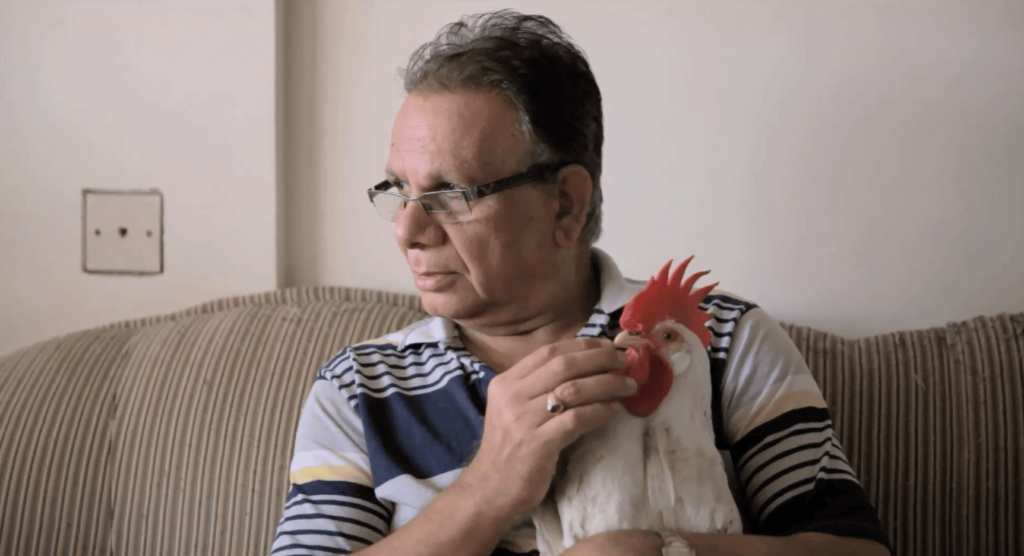 This is a very, very Bombay film. It’s overcrowded, it’s packed. You have such a density of people that it leads to chaos and that leads to extraordinary situations. There’s like an intersection between the insane and the mundane, you know. A lot of India exists in that intersection.

As an outsider, you may find that there’s something a bit eccentric here, a little bit idiosyncratic or a little bit quirky. But India has almost 2 billion people and it’s not even one single country. From state to state, the language changes, the food changes, the culture changes. But what remains constant is this chaos which gives birth to very absurd situations such as the one depicted in Tungrus.

Well, I realised after making the film that the rooster is a political allegory of ‘the outsider’ in your environment.

This film says a lot about what’s happening in India right now, because we’ve gone into a very extreme political situation these last 10 years. India is dealing with a new kind of religious nationalism, where certain groups are not welcome and considered ‘outsiders’, even if it has never been our history. We have always been a very secular and open country.

Back in 2017 when I was shooting the film, there was a ban on selling and eating beef in many states in India. This film is then about your cultural relationship with your food, and in India, this relationship is being restricted, so I just think that this political message was within me subconsciously already when I became attracted to the story. 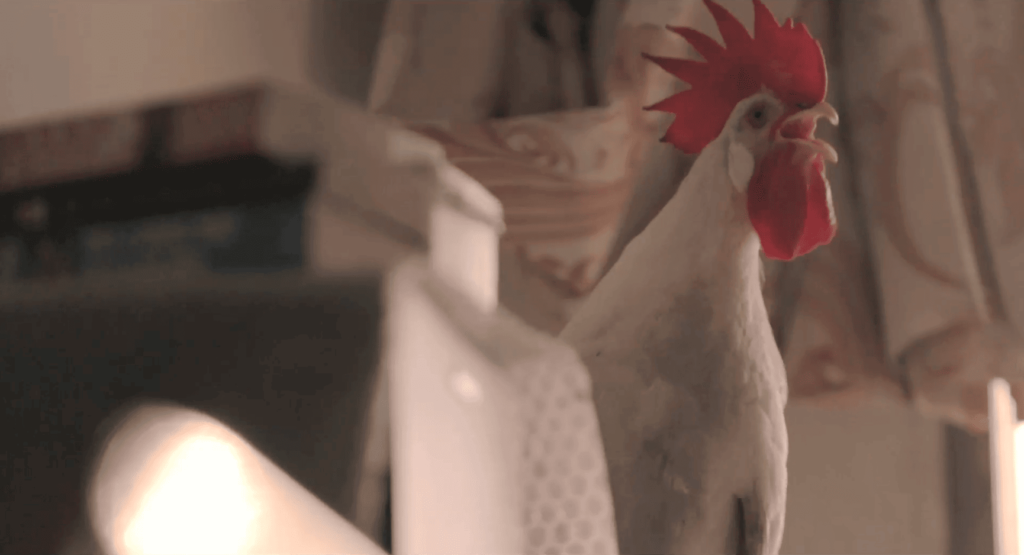 Imagine a country like India where we make so many films every year, we’ve got such a huge film industry. But there is not enough love and support for this form of expression.

Yet to produce a fiction film, you need a lot of money. You have to cast actors, you need a crew, equipment, costumes, lights, makeup… But for a short documentary, if you have enough money to fund it yourself, you have total freedom. The kind of freedom that I have experienced with Tungrus. It’s incomparable.

I do want to make a feature-length film, whether it’s fiction or documentary, but I already know that I would not have the same creative freedom as an artist. So I would say: “Long live short documentaries!”. And a full salute to 99 for helping filmmakers reach new audiences.