Isolation in northern Quebec, like for Martha in Aupaluk, Nunavik (population 200), is ordinary.

She’s 16, and her best friend lives 80 kilometers away, with no roads in between. Her school feels empty to her, but she likes the calm. She paints in bright colours, alone in a classroom, dreaming of college, and wondering about having children herself. At home she sews parkas. In the arid cold, she walks the frozen bay. 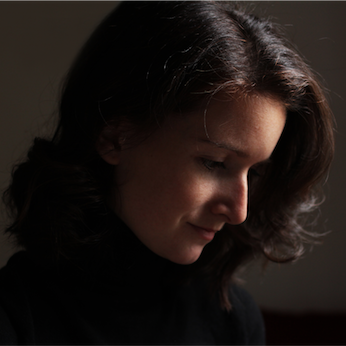 “Documentary introduced me
to people and a universe
I never would have approached otherwise.”

I started getting interested in film and photography in my teens. The biggest town in the region where I was born, in western Quebec province, was Rouyn-Noranda, and my parents would take me to the cinema there, to see Quebecois films. Afterwards, we’d go out to eat, and we’d talk about the film we’d just seen. Those were precious times. When I was fourteen, I started making short films with my friends, as school projects. I loved every stage in the creative process, but especially shooting, when I was handling the camera, looking to frame a shot. That’s when I found the power of an image to communicate, and how important it is for the story.

I took Fine Arts in cinema in college. After those two years, I was sure that was the career for me. I was accepted into l’Université du Québec à Montréal’s film course, specializing in Director of Photography. That’s when I discovered the documentary, that I knew very little about, and fell in love with it.

I’m not outgoing by nature, and documentary introduced me to people and a universe I never would have approached otherwise; it still lets me do that. As director of photography, I got a real kick out of working together with reality that we don’t have much control over. When I graduated, I won a prize for my short documentary project called ‘Where I Live’. That film marked the beginning of my career as director.

That short was full of all sorts of challenges, especially the weather. Nunavik gets lots of storms and blizzards in winter, and they can go on for days. My team and I had to plan a well-thought-out list of the shots we were going to film, depending on the temperature. We weren’t prepared to waste time, especially when there was a storm brewing.

Sticking to a shooting schedule was hard because it had to work with the slow day-by-day life of the Inuit. At first, I thought that was going to be a problem, but it ended up being a really good thing, it fed the way I went about directing the film. The thing was that every moment spent with Martha was invaluable, and the slow pace of the village was a strong inspiration when we were editing the documentary. My time in Aupaluk showed me how much our high-speed lifestyle (as well as some film shoots) makes no sense, and that we should learn from how that community lives.

The interviews with Martha were a major challenge; the only place we could record with a good sound quality was in a broom closet in the school. It was essential that Martha express herself in her mother tongue, Inuktitut, it’s integral to her identity. I don’t speak it, so I needed a translator. A few hours before we were going to do this interview, the person in charge of translating got sick. With my team, we decided to go ahead anyway, asking Martha to tell us what her answers were in English. In post-production, we hired another translator. After all the things we had to overcome, the experience of filming in Nunavik made me deeply aware of the reality these people face, and its young people who I knew so little about. I hope that I’ve succeeded in telling a story with ‘Where I Live’ that avoids preconceived ideas, and that draws back the curtain on another side of things than the way some big media show them.

It was clear to me that the imagery and assembly of the film had to reflect the slowness of the village. In my Director of Photography role, I chose these long, fixed shots that let us think about how vast this place is, and about the young people roaming around – the streets, on rooftops, at the school. Using a wide angle lens gave our subjects the freedom to move around and express themselves, at the same time as letting me capture several activities within the same frame.

This also underscored Martha’s solitude when she felt lost in the immensity of the tundra. The northern landscape, austere and majestic, acted as a carrier of our main character’s emotions; using wide open shots allowed us to wrap ourselves in the place as well as in Martha’s inside universe.

I set out to paint a portrait in ‘Where I Live’, sensitive to the intimate reality of a young Inuit who is asking herself the same existential questions as anyone of her age, even though she lives in an isolated territory. I avoided some of the drama Martha has lived through, on purpose, because I think the reality of life for the Inuit is often portrayed in a negative and tragic way on the screen. As an outsider, I also had to look at her and the Aupaluk community with sensitivity and respect.

I wanted to hear from this girl in her own words for my short film, through a series of brief reflections where she tells us about her daily life, what she’s interested in and what she worries about, hearing her out of frame. My own view of her reality, and young people, mainly came out in the way I filmed the village and the expanse around it. The bottom line is that, even if Martha’s universe is quite different from mine, I found myself in it through the complex relation she nurtured with the land she was born to.

I’m also from a far-flung region – Temiscaming – and I understood her dilemmas, and how to portraythem on the screen.

I’ve just finished postproduction on my first full- length documentary, called ‘Passage’. The film explores the themes of the rural exodus, attachment to the land, and the transition into adulthood. We follow 18-year-old Gabrielle and Yoan’s daily existence in summertime in Temiscaming – for an hour and twenty minutes.

This first long form film is very personal for me, exploring where I spent my childhood and adolescence, through the reality of two young adults with different ambitions. If all goes well, ‘Passage’ will be released before the end of 2020, and if not, in 2021.

The timing of this first collaboration with 99 is really good for ‘Where I Live’, as it just wrapped up a successful two-year run in festivals. Having it adapted into several languages gives it a great opportunity to be more widely seen, gives it a second wind, and a chance to reach a new audience.

99’s mission gives a democratic voice to the auteur documentary, which is not seen enough in our industry. I admire that, and I think we need that.