Through home-movies discovered at my grandparents’ home in Bordeaux, I recount my childhood in Mandima, a little village in northeast Zaire, where I was born.

Starting with a panoramic still of the great departure, I observe and recall those first ten years of that young boy who would, one fine day, have to leave for the city, for high school.

He leaves behind his friends and a whole way of life. That life, his thinking and his codes, are to be learned anew. 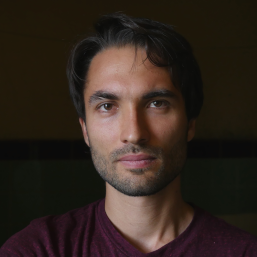 I was born in a small village in eastern Congo (DRC, former Zaire), in 1986. We left for Burkina Faso when I was ten, me and my family, and I went to a French high school. Around final exam time, I went to see some films at the Fespaco Festival in Ouagadougou.

That’s when I started to want to make films. After a few years on board a humanitarian aid ship, I went to film school in Lausanne, Switzerland, where I mainly planned to make documentaries. I was also first assistant director on some fiction films, before specializing in films about social entrepreneurship, and for NGOs.

Goodbye Mandima was a project I did in second year. I was questioning a lot of things around this time, including myself, and the way the film school was run. They’d assigned sport as the theme to make a documentary. After a couple of uninspired attempts, I found this photo that became the backbone, the common thread of the film: leaving Mandima.

I wanted a good enough mark to pass the year, most of all—after two major failures! The main challenge was to bring the voice narrative perfectly in line with the visual imagery, a word-image dialogue. I learned a lot about that while I was making the film, and about vulnerability: daring to show yourself, everything that’s strange about you, your faults and insecurities. I think my artistic priorities today are driven by that. I look for the sincerity of pictures and characters, that’s what I like.

I’m doing a lot with NGOs and social enterprises at the moment, with Habarifilms. Travelling, meeting people, capturing the energy of a real project and the people behind it, and turning that into something that shows beauty and enthusiasm—that’s what feeds me, inspires me.

I think it’s excellent that a platform like this exists, which makes it possible to see documentaries that not a lot of people might be able to follow otherwise. It’s an honour to have my film on it.