Koreans can be born on a Samsung maternity ward, study at Samsung University, support the Samsung Lions baseball team at Samsung Stadium, have fun at the Samsung amusement park with a Samsung phone in their pocket…

In South Korea, Samsung is a state within a state. The small-scale, import-export company founded in 1938 by Mr. Lee Byung-Chul has reached the pinnacle of Korean business rankings over the last 80 years. The company is responsible for 20% of Korea’s GDP.

Its Orwellian ubiquity gives rise to a local nickname: “The Samsung Republic”. 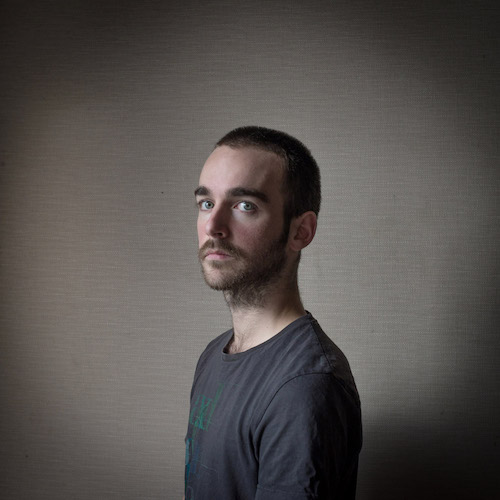 “Lots of Korean friends admitted surprise
when they saw the film.
They had little idea of the extent of Samsung’s grip.”

When I was young, I watched a video tape of Jurassic Park and it left a lasting impression. I made my own versions on my dad’s camcorder using plastic models to create the action… Then, at high school, I opted for an arts baccalaureate specialising in cinema, before moving on to the equivalent of a BTEC Diploma in Audiovisual Production. I wanted to focus on what, for me, was the most creative element – the film editing process.

As professional life beckoned, I changed tack, studying photography at the École Louis-Lumière, followed by eight years as a photojournalist. Little by little though, I was pulled back from photography into documentary film production. 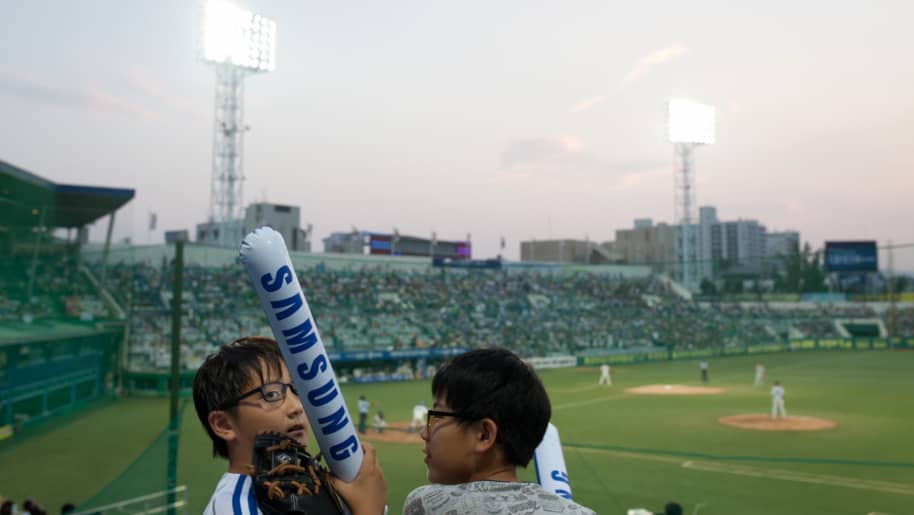 The project sprang up after I read an article by Martine Bulard in the Monde Diplomatique newspaper. The journalist shed light on the grip that Samsung held over South-Korean society. It was enlightening, and as a photographer, I felt as if there were dark corners of photographic potential left unexplored.

I travelled to South Korea for the first time as a kind of fact-finding mission – to speak with militants, workers’ unions, and in particular, to see for myself how the chaebols (multinationals like Samsung, LG or Hyundai) weighed upon Korean life. Once back in France, I shared some of my photos with the Le Monde newspaper, who agreed to fund more reporting on the issue.

During my second visit, I was able to dig deeper by focussing solely on Samsung and painstakingly picking to pieces each ‘tentacle’ of its activity. Following publication, I felt there was still more to be explored through cinema, and so it was that, belatedly, after my return, the idea of making a film took shape. 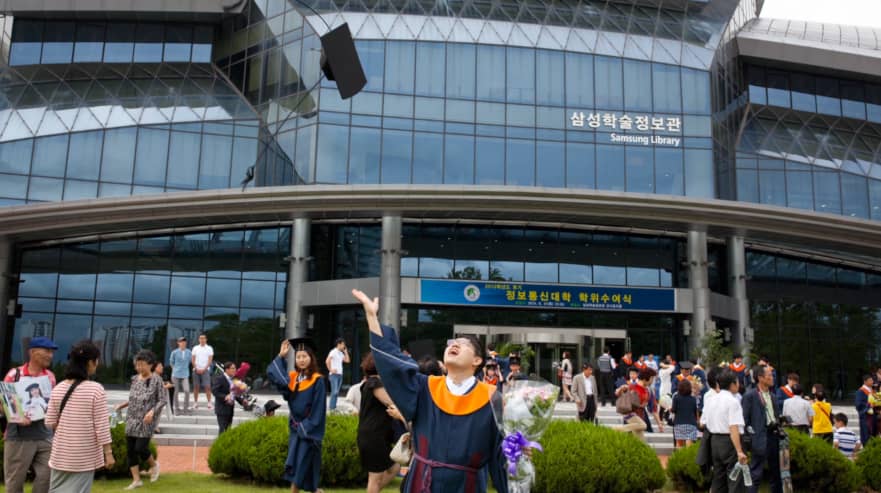 Yes, that’s right, the narrator is a fictional character, but everything she reveals is factually true. I knitted together all of the interviews carried out during my five months of fact-finding, gathering feedback from employees across various subdivisions of Samsung, ex-employees, students, protesters etc. During the ‘mashing together’ of information, I brought this character to life – a character that was fully credible, so the leap of imagination was small. This scripting method was reliably attention-grabbing and allowed for the inter-connected threads to plait together nicely.

Upturning the underbelly of capitalism is always a challenge, in the sense that we enter a complicated, abstract ‘twilight’ which, frankly, can also be boring. Creating a story wrapped up in problems can be mind-bogglingly hard too, and the cogs of capitalism that turn our world can be complex for the uninitiated. So, through powerful images and editorial cuts, I wanted to create an accessible, revelatory work that dredged up hidden truths from deep within the financial ‘machine’.

“Photographs allow for a comforting buffer
to be placed between subject and viewer.
Time stands still, life’s hustle is paused.”

Absolutely. Even though Samsung is world-renowned for electronics, it’s far from being the only string to its bow. Through its 79 subsidiaries, Samsung makes up the fabric of South-Korean society. It is therefore absolutely possible to be born in a Samsung hospital, to study at a Samsung university, to live in a Samsung apartment with white goods from Samsung…If you want some escapism, you can go to South Korea’s biggest amusement park, Everland – obviously part of the Samsung ‘empire’. And if that’s not enough, it’s possible to hire Samsung facilities to get married, or take out Samsung insurance, or buy Samsung clothing. It’s definitely a documentary! 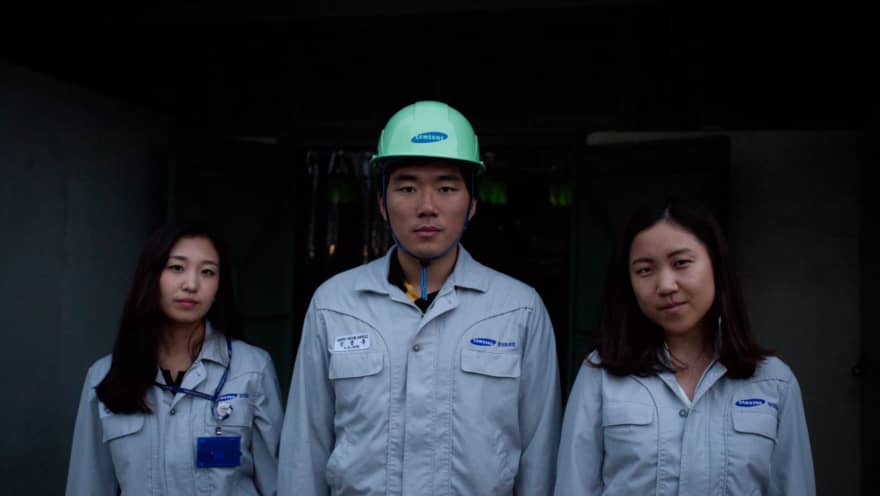 I wanted to create a contrast between stark reality and the gentleness with which the story is told. Photographs allow for a comforting buffer to be placed between subject and viewer – time stands still, life’s hustle is paused. At the same time, we are rocked by the dulcet voice of the narrator; it is as if she sings us a lullaby whilst flicking the pages of a picture book. It’s a pleasure for us to dissect each image at our own pace, a bit like a Bruegel painting.

The film sheds light on corporate interference on a national scale. Our thoughts turn to George Orwell. The reassuring thing about his work was that it was fiction. But the “Samsung Republic” is all too real. This extreme form of capitalism that brings nationwide prosperity – along with a dangerous dependency on one company – is a paradox worthy of development through images.

Lots of Korean friends admitted surprise when they saw the film. They had little idea of the extent of Samsung’s grip. In South Korea, it is really difficult to talk about it. Samsung cultivates its model image and has the right connections to do so: the main newspapers are financially beholden to it. Which Korean media channel could turn away from Samsung’s messaging? Journalism in South Korea is thus a compromise that unsettles objectivity and impartiality.

In political spheres, the problem is similar. In 2008, Mr. Lee Kun-hee, the Samsung group’s president, was convicted of misconduct, fiscal fraud, corruption and embezzlement. But on exit from the court, he was pardoned by the former president, M. Lee Myung-bak, in the name of “state interest”. It is obvious that Samsung is so essentially powerful to South Korea’s economy that its directors are above the law. What politician would publicly oppose the private interests of such a giant; a giant upon which the economic fate of their nation depends?

The tooth-and-nail battles led by some employees for industrial illnesses to be recognised as such have, however, borne fruit, but at the expense of many years of fighting! Unions have won certain freedoms, but these are tentative steps forward and require a permanent effort for ground not to be lost. 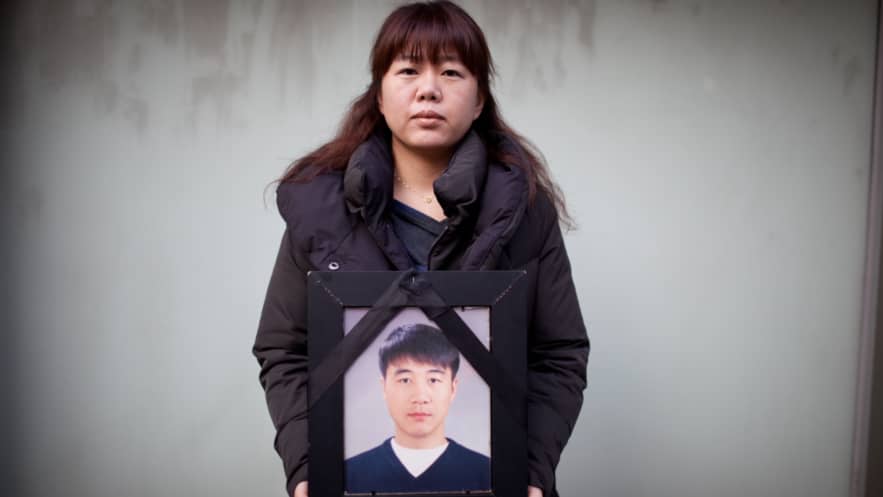 I have just finished a new investigation into the work of another multinational giant, Glencore, who specialise in raw materials. I am also in the process of scripting my first fictional screen drama!

I love that 99 strips off the usual English-language straightjacket of so-called ‘international’ films. Although English meets practical market demands, it’s a cultural nonsense. I therefore appreciate that 99 does justice to the universal nature of cinema via a respect for the diversity and wealth of our languages.

“Goodbye Mandima” by Robert-Jan Lacombe is a real masterpiece that I highly recommend to everyone. This film draws an analogy with mine, but has nothing to do with why I’ve chosen it. The simplicity and warmth of “Goodbye Mandima” is impactful. Through a modest story, comes a universal reach.