Bed-ridden Alicia, 96, hasn’t long to live. Tended to by her daughters, filmed by her granddaughter, she gazes out her window. Her memory is going. Her appetite, too. How she used to love desserts! And yet she still makes others laugh and smile.

“Life is a hospital where every patient wants to switch beds.” 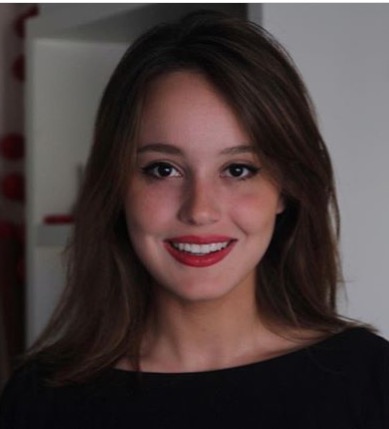 “Everything was on a loop in this room.
Things went on outside,
but inside everything stayed the same.”

I’m 22 and in the last year of my screenwriting and directing studies at the Cinema and Audiovisual School of Catalonia (ESCAC).

The message formed on its own, bit by bit. When my mother and I went to the nursing home to visit her, the sad reality struck me hard. But at the same time, it was very endearing, seeing my grandmother’s joy each time she had a visit, and brought her a cake, That’s what made me want to film her, not just to depict her spritely, joyous personality — in spite of being stuck in bed — but also to show how important it is to keep old people company in these situations.

I wasn’t expecting to see this joy ebb away, little by little, until she didn’t want cake any more, and could hardly stay awake. I saw how frustrated my family became, insisting that she keep eating, and that she stay awake, in other words, stay alive.

It started to get tense in there. ‘Eat,’ my mother told her, and again and again she ‘d say, ‘I don’t want to any more.’ That’s when the documentary took a different turn. I began to ask myself whether this wasn’t a waiting room for death. Why is it so hard for us to accept this change? My grandmother died a few months ago. But in a way it was best, so she wouldn’t suffer any more.

She was at the beginning. Since the filming went on for a long time, and at different times of the year, and my grandmother’s dementia came and went, in the end there were some days when she wasn’t aware.
I lived with my grandmother when I was small, and she was always there for me. The trust between us and between my mother and me meant I could go into her room freely, even without asking. My grandmother was also okay with us filming her, she found it fun, to ‘act in a film’.

I found it interesting for the spectator to identify with Alicia by being there, shut up in this room in the same way she was.

The sun coming in the window, the other patients complaining, the nurses going here and there. Everything was on a loop in this room. Things went on outside, but inside everything stayed the same. The only difference was whether it was daytime or night, or whether they bring you one thing to eat or another. The rest was all stagnant. The only thing that changes is your body, stuck closer and closer to the bed, and your spirit, further and further from reality.

The only difference is when your daughter comes to see you and she brings you a cake.

It was my mother. This shot came out of one of the last days of filming. My mother saw my grandmother powerless, having to face this reality and accept it, knowing nothing could change it.

The way I saw it, this had to be placed at the end of the film, since, in a way, it’s my view as the director and the spectator’s view, who, even though he wants Alicia to live, can’t do anything about it.

It’s incredible to be able to show people of different nationalities these moments lived by my grandmother, in a little room in a village in the north of Spain.

Thank you for that.