María sits by the side of the road behind a rickety, homemade stall, her expression a blend of forbearance and exasperation.

The old Spanish lady greets passers-by and invites them to stop, to spend a few minutes with her as they continue on down the road. They are pilgrims and have a long, arduous journey ahead of them, on the ancient Camino de Santiago. María’s encounters with the passing strangers allow us to catch a glimpse of the modern pilgrim.

Despite encountering some difficult pilgrims throughout her day, María nobly continues her task. 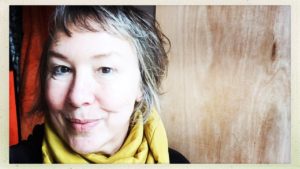 “María lives with a philosophy
that we can all learn from:
If you wait long enough,
you will get what you are longing for.”

I grew up in the 1960/70s, when Scotland was a firmly Socialist country. Days of black and white TV’s, vinyl records and not even a landline. From a very early age, I wanted to explore the world, which I put down to a globe of the world that I owned, and a collection of books, each of which was about a different country.

So began a lifelong love of travel, adventure and interest in other people and cultures. I didn’t go to university until I was 30 and then did my MFA (Master of Fine Arts) at age 50. I’ve lived in a number of different places, had lots of different jobs, but from my early 30’s until now, filmmaking has been a passion, although I didn’t take my role as a filmmaker seriously until I started my MFA in Film Directing. 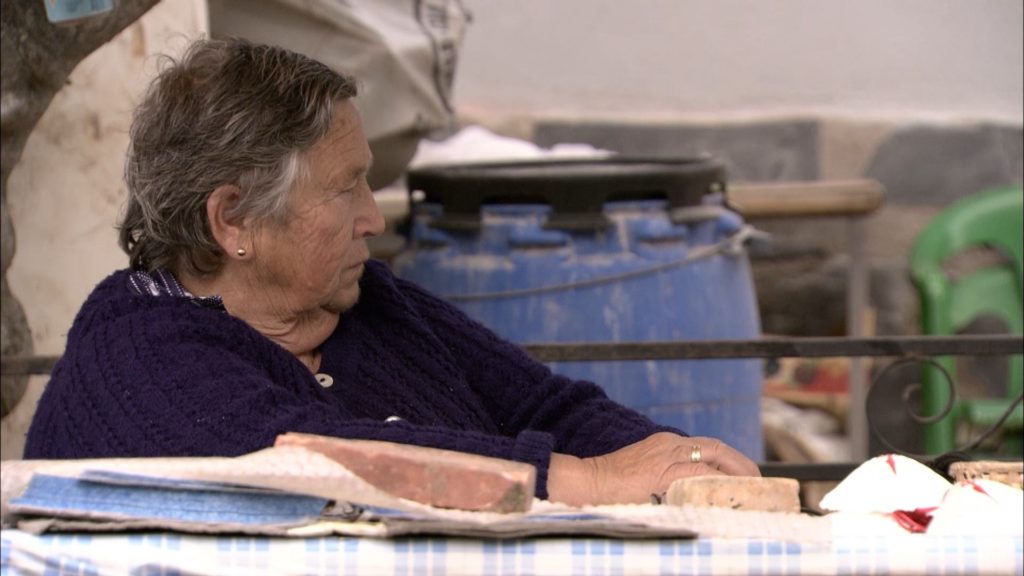 In 2007 my life changed, and there began a year of travel and wondering what I would do next, where I would live. I spent time in Austria, India, Nepal, Berlin, New York, and finally I decided to walk the Camino de Santiago. It turned out to be one of the most intense and pivotal experiences of my life.

When I arrived at the Edinburgh College of Art in 2008 to start my MFA, the Camino was on my mind. I was determined to make a film about some aspect of this incredible place. When thinking of the many places along the way that had left an impression on me, María’s little stall came to mind. I had no way of getting in touch, and so when we arrived in Spain in 2009 to shoot the film, I could remember exactly where she lived. It was a rainy day, and she was inside the shed, talking to one of the pilgrims who had stopped. We drew up some chairs, and by the end of the afternoon, María, with the blessing of her daughter, agreed to be in our film. 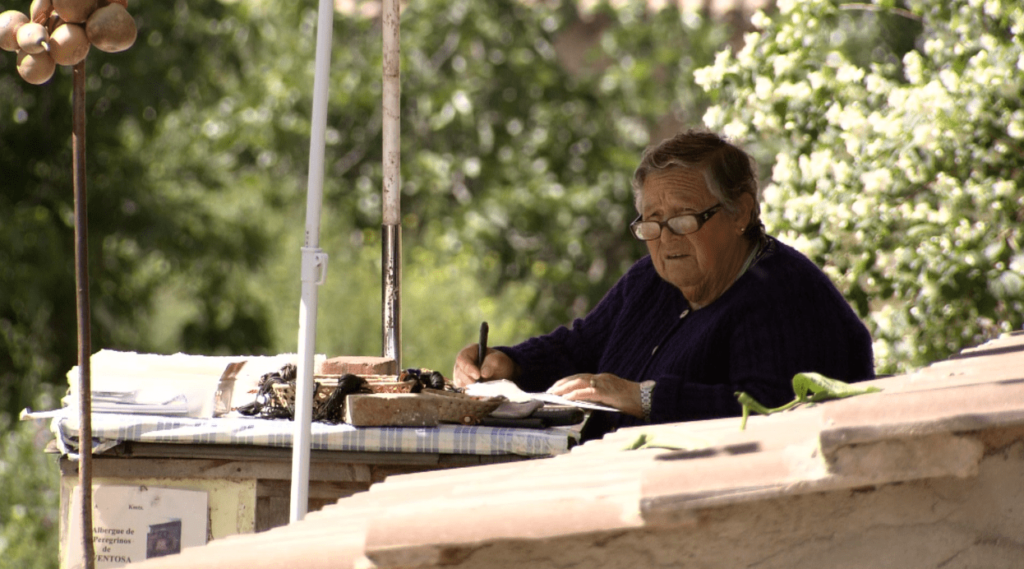 One of the special things about María was her incredible generosity of spirit. She was very spiritual and what she did, she saw as a service. She did not look for any kind of special reward or seek attention for what she was doing. She just did it, each day, rain or shine.

I think one of the aspects of her life which I found most interesting is that she had never walked the Camino, nor did she have any interest in doing so. And while the pilgrims walk for the attainment of religious virtue, it seemed to me that María, sitting each day, watching them walk by, had actually a great deal more piety than many of the pilgrims.

At the time, I was very much in love with this kind of slow films, totally observational, giving the viewer the feeling of actually being there. I thought if I could get away without music, then I would like to, as music often implies a certain emotion or feeling and I wanted the viewer to attain that without music, just through the shots, and through María’s words and actions. I decided from the beginning that my presence as director would not be a part of the film. That it would follow as much as possible a ‘direct cinema‘ style. 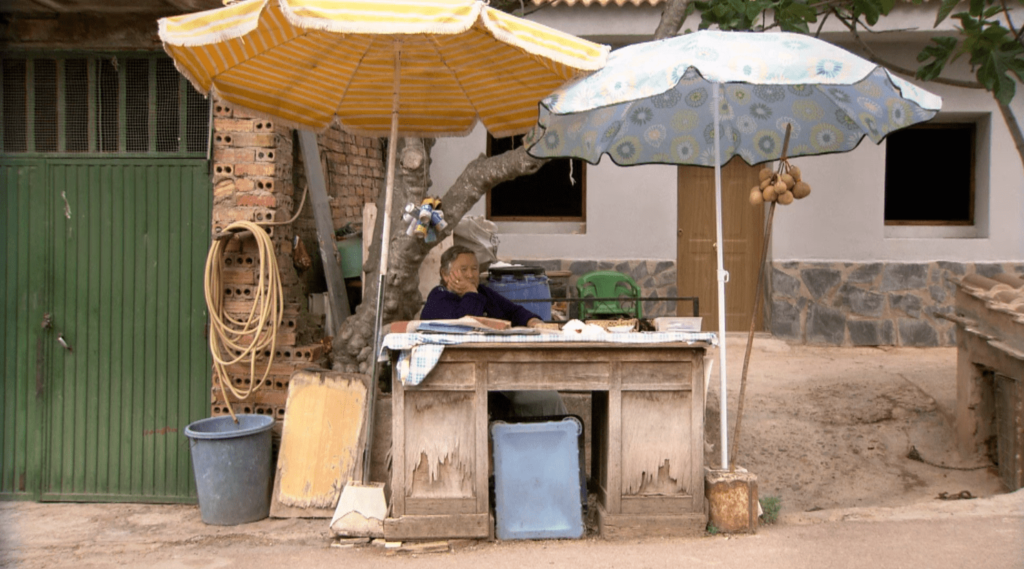 Before I left for the shoot, I knew that I would need a translator, since although I had been in Spain a few times, and walked the length of the Camino which took 6 weeks, my Spanish was very rudimentary. I was very fortunate that I was introduced through a friend to Hannah Hüglin who speaks fluent English and Spanish. She was available to come with us for the duration of the shoot. So she became a critical part of the crew during the shoot.
All translations were conducted through her. I would speak to María and Hannah would translate. Obviously, everything took longer, but it worked out fine as, during the shoot, we were very much following María’s schedule, and overall it was a very relaxed and enjoyable time.
As you can see in the film, most of the ‘action’ is observational, and we only really spoke to María on camera for one interview, which was conducted by Hannah, and took place when we had done most of the shooting, so I knew exactly what I wanted to ask her about, and we had gone over everything a number of times already. Each day we would go over the footage and Hannah would translate the important elements so I knew what I wanted to ask by the time we did that particular interview.
I think you are right – it has a universal message. It is about life, death, and everything in between. I think the character of María is very appealing for many people, as she is very true to herself, and we see the changes to her mood as each part of the day progressed.

She comes across as ‘real’ and I think that is refreshing for people. She is funny and fierce at the same time. And she lives with a philosophy that we can all learn from. If you wait long enough, you will get what you are longing for, even if that is something as simple (yet powerful) as someone who recognises you.
Since I made “María’s Way”, I’ve made quite a number of short films, a feature film and a TV film, all documentaries. I’m now producing a feature film as well as a micro-budget short film.
I’ve also been involved in teaching for a number of years now, as well as mentoring filmmakers as part of a collaboration between the British Council, the Scottish Documentary Institute and organisations in China, Indonesia, Pakistan, Libya, and Jordan.

It has been a pleasure to work with 99 and it is particularly wonderful that “María’s Way” is available in several languages. Everyone wants as wide an audience for their films as possible.

Making films more accessible to viewers around the world is definitely one of the reasons I am proud to show my film on 99.